We are now open.

Please note our opening hours are: -

These hours are being monitored and are subject to change at any time.

Thank you for your continued support and custom.

We confirm that hand sanitizer is available upon entry to the Club and various stations throughout the Club.  Social Distancing is still very much in the forefront of our minds and ask that all members, visitors and guest adhere to these rules.

The Unity Club is a vibrant and busy place where members and their families can enjoy themselves in a safe and friendly atmosphere, where Entertainment is provided, mostly free of charge with the exception of New Years Eve, offering members the use of our facilities, that include a Function Hall, Skittle Alley, Pool Room, Snooker Room, Darts facilities and a Conference Room. Room hire is available upon request.  Parties, Weddings, Christenings, Seminars and any other celebrations all welcome.

Membership fees and drink prices are considered to be some of the lowest in the area with a New member joining fee ast a special offer price of just £25.00 (subject to change without notie) which includes the entry card.  Renewals at present cost just £12.50 per year for existing members.

We also offer a temporary membership for a month of just £7.50 for people new to the area.

With membership numbers touching a thousand which includes Darts, Skittles, Pool and Snooker teams who play all year round.  We also have Skysports available on 3 screens (1 Big Screen) within the Club.

Some History about The Unity Club

The Club was formed in October 1922 as a place for working men to meet after a days work and enjoy a drink.  It was very much a male oriented club and no women were allowed anywhere near the premises.  The men were only allowed entry if they were wearing a collar and tie.

It continued on this basis until after the Second World War when several changes were made to the Club rules.  As within the rest of the Country, times were changing and it was not long before the women of Street got their act together and starting putting pressure on their men folk to allow them to join the Club as fully paid up members.

On a Sunday night in the late 1940's a meeting was convened at the Club and a proposal was put to the committee by the membership that women be admitted as members.  After much coughing and spluttering by the men folk who saw their sanctuary being lost, a vote was taken late in the evening by the large number of members present and the resolution was passed.  The Club committee retired to drown their sorrows.  The shock victory made front page news in the local paper and there were many ashen faced men walking around Street.

From those early days,  the Club has gone through many changes particularly within the Club building which has been enlarged many times to accommodate the growing membership.  The Conference Room is available for hire and was built in 2005.  The Club has seen numerous renovations and decoration work over the years.

Here are a few pictures taken back through the years from historical clothing (pictured is Mr Rice),  prior to the Unity Club being built, as you can see the old cinema (Maximes) was built which is now Pillars Bar & Grill, along with a picture of Pursey's Garage - the building now holds Arnie Levics Garage. 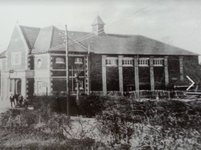